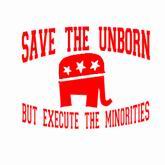 Bump and Update: Today's Southern Baptist Times reports that the state will hand over 50% of the money it collects from the sale of "Choose Life" plates "to pro-life agencies." According to the Gannett owned paper, we can expect our political opponents to begin identifying themselves on the highway by this fall.

Meanwhile over at Tennessee Right to Life (TRL) there is a celebration going on. The anti-choicers are thanking God and Reps. Glen Casada and Phillip Pinion, as well as former state Senator Jim Bryson. And they are thanking "the 1,265 Tennesseans who reserved their state authorized plate."

Brian "Womb Envy" Harris, the devout leader of TRL, urges Gov. Bredesen to hurry up and get the message on the highways, "We now call on Governor Bredesen to immediately expedite the production and distribution of this popular plate. Tennesseans have waited long enough to get this plate on the road and to generate proceeds for agencies which help women and families facing difficult pregnancies."

The TRL website and email alerts request that their followers email Governor Bredesen with that request.

Here's the text (pdf) of the US Court of Appeals opinion which ruled that: "Government can express public policy views by enlisting private volunteers to disseminate its message... " (end of update)

The Supreme Court announced today that it will not hear appeals to stop states from issuing "Choose Life" specialty plates.

Previously, the US Court of Appeals for the Sixth Circuit okayed the "Choose Life" specialty plates here in Tennessee and made George Orwell proud by ruling that the Choose Life plates constitute government speech.

So, the state of Tennessee is anti-choice and government speech is apparently protected by the First Amendment. (!)

We can expect Tennessee to begin issuing the plates any time now. A percentage of the proceeds will be used to fund an anti-choice group.

Governor Bredesen - a Democrat who is hugely popular with Republicans - allowed the rightwing bill to sit on his desk long enough to become law.

Tennessee does not have a "Pro Choice" plate in the works. Frankly, I don't know anyone in this state who would put a "Pro Choice" specialty plate on their car.

The obvious reason is that the anti-choicers have a well-documented record of violence. If there are any states that do issue "Pro Choice" plates, I'm betting they are very blue.