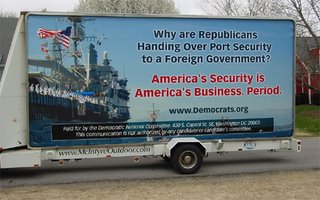 Roughly 1,800 members of the Incompetent Party will invade Memphis this weekend (March 9-11) to size up potential loser candidates for the 2008 presidential race. The sign pictured here will circle the stomping grounds of the 2006 Southern Republican Leadership Conference , courtesy of Democrats from Tennessee.

I don't envy the potential 2008 Republican presidential candidates who will be in Memphis this weekend to attend the Southern Republican Leadership Conference. In their speeches in Tennessee, they will be forced to proclaim their support for George Bush's incompetent leadership while his approval rating is at 34%.

I guarantee that one issue they won't be talking about is port security.

The Incompetents will hold their presidential preference straw poll on Saturday, courtesy of Hotline. The last winner of the poll was the Leader of Incompetents, King George, himself.

Speakers at the wannabe president event include Bill Frist, Trent Lott, John McCain, Marsha Blackburn, Lindsey Graham, Haley Barbour, Norm Coleman, Dennis Hastert, Zach Wamp, Mitt Romney, Mike Huckabee, Ken Mehlman and Rick Perry. The Radical Party of Incompetents alleges that Rick Santorum has been invited to speak, but he has yet to confirm. Of course, Rove the Rat will be there.

Memphis residents have our deepest sympathy.

Autoegocrat at Pesky Fly says he's hoping to attend, so check out the Memphis blog for news of the debaunchery. I hear the Incompetents are lousy tippers.

Last night, Chris Matthews suggested that the new slogan of the GOP might be "Competent Conservatism." Heh.

How low can they set the bar?

The fools couldn't sell anyone on the idea that they are compassionate, so they may as well run with this new fairy tale.

Thanks to Jennifer at donkey o d for news of the Dem action.