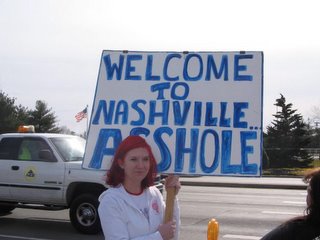 At last, here are the promised photos of Tennesseans expressing their opinions about the worst president ever, George W. Bushie. Two hundred citizens showed up in the middle of the work week to protest Bushie's visit to Nashville. The Boy King was in town to regurgitate his SOTU, or to kick off yet another long year of election campaigning. Bushie has been dubbed the War President, and that he is. But he is also the Campaign President. The pResident is always campaigning. Fortunately, the nation has no need for him to do anything other than criss cross the nation doing PR work for his wealthy white party, cause disaster strikes and things fall apart just as fine with or without Bushie's oversight. 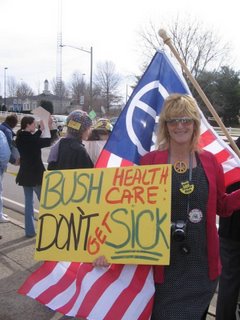 Wealthy Republicans inside the Opryland Hotel cheered at the prospect of enjoying tax cuts forever, while 60,000 poor senior citizens had nothing to cheer about as they were cut from Medicaid via the House passage of the cruel Republican budget. 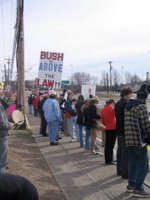 The protesters included college students outraged about cuts to financial aid and parents outraged about the immoral and never-ending Iraqi war that threatens the lives of their children. Many women spoke about the looming threats to both reproductive rights and the basic human rights of gays and lesbians. Others spoke grimly of Bush's flagrant disrespect for the U.S. Constitution.

The diverse group of citizens included the irreverent and the reverent. Some were deadly serious, while others were in jovial spirits. One happy young woman distributed her own delicious homemade Impeach Fudge to the hungry crowd. Some drove from out of town for the event, such as the blogger at 10,000 Monkeys and a Camera. The blogger from Red State Exile was also on hand. 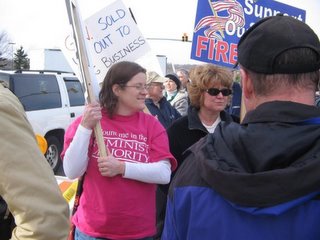 Members of the local National Organization for Women were on hand, as well as Planned Parenthood, Peace Roots, Tennessee Guerilla Women, Tennessee Independent Media Center, the Greens and Democracy for Tennessee. The protest was organized by the Peace Coalition and the Nashville Peace and Justice Center. 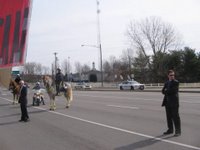 Approximately 20 minutes before King George arrived, the streets were shut down. The silence was eery. Only police and plain suited pResidential guardians occupied the streets. Eliot Ness types stood in the streets and stared at protesters. Some of the suits took our photos. 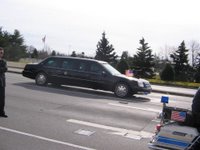 Bushie is headed for Minnesota next. I hope all of
you guys are ready to welcome the a-hole to your state.