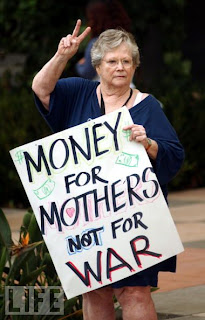 While poorer nations have welfare programs that actually lift families out of poverty, the U.S. can't or won't.

As the text of the nation's cavemanesque welfare laws attests, this cowboy nation excels at punishing women who bear or raise children without a man:

The poor people who were dropped from cash assistance here, mostly single mothers, talk with surprising openness about the desperate, and sometimes illegal, ways they make ends meet. They have sold food stamps, sold blood, skipped meals, shoplifted, doubled up with friends, scavenged trash bins for bottles and cans and returned to relationships with violent partners — all with children in tow...

“My take on it was the states would push people off and not let them back on, and that’s just what they did,” said Peter B. Edelman, a law professor at Georgetown University who resigned from the Clinton administration to protest the law. “It’s been even worse than I thought it would be.”

[T]he number of very poor families appears to be growing. Pamela Loprest and Austin Nichols, researchers at the Urban Institute, found that one in four low-income single mothers nationwide — about 1.5 million — are jobless and without cash aid. That is twice the rate the researchers found under the old welfare law. More than 40 percent remain that way for more than a year, and many have mental or physical disabilities, sick children or problems with domestic violence.