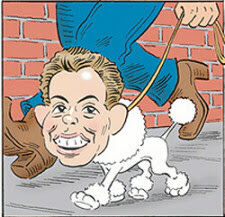 London: Gordon Brown’s smile does not look at home on his face. It sits there uneasily, like an uninvited guest at a party, until his features can resume their comfortably dour grooves.

The brooding Scot ended his decade-long run as a hefty Heathcliff to Tony Blair’s chatty Cathy, stepping out of the shadows Friday with visible relief to begin a campaign for prime minister that he has already won.

Grumpy Gordon is an enigma compared with Captain Showbiz, as the glib Mr. Blair is called by a morning TV host here. The 56-year-old son of a Presbyterian minister, with hooded eyes and frugal charm, will be hard pressed to compete on the European stage with Iron Frau Angela Merkel and Nicolas Sarkozy, dubbed “Thatcher without petticoats.”

Mr. Brown’s school friends came on TV to say he was more fun than he looked. “He enjoys a good glass of wine,” said his pal Bill Campbell. The chancellor has been striving to move beyond his reputation as a man so obsessed with the budget that he wouldn’t even share the details in advance with Tony Blair. He traded the green eyeshade for pastel ties. He told a women’s magazine that he liked the rock band Arctic Monkeys, but later couldn’t name any of their songs.

Mr. Brown was considered the uncool half of the Cool Britannia team that swept into power on a wave of Champagne, celebrities and Cherie Blair’s New Age guru. But thanks to his role as W.’s interlocutor and translator, Tony Blair is uncool, too.