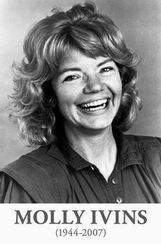 Molly Ivins, the Texas columnist, died of breast cancer on Wednesday. I first met her more than three years ago, when our book tours crossed. She was, as she wrote, “a card-carrying member of The Great Liberal Backlash of 2003, one of the half-dozen or so writers now schlepping around the country promoting books that do not speak kindly of Our Leader’s record.”

I can’t claim to have known her well. But I spent enough time with her, and paid enough attention to her work, to know that obituaries that mostly stressed her satirical gifts missed the main point. Yes, she liked to poke fun at the powerful, and was very good at it. But her satire was only the means to an end: holding the powerful accountable.

She explained her philosophy in a stinging 1995 article in Mother Jones magazine about Rush Limbaugh. “Satire … has historically been the weapon of powerless people aimed at the powerful,” she wrote. “When you use satire against powerless people … it is like kicking a cripple.”

Molly never lost sight of two eternal truths: rulers lie, and the times when people are most afraid to challenge authority are also the times when it’s most important to do just that. And the fact that she remembered these truths explains something I haven’t seen pointed out in any of the tributes: her extraordinary prescience on the central political issue of our time.

I’ve been going through Molly’s columns from 2002 and 2003, the period when most of the wise men of the press cheered as Our Leader took us to war on false pretenses, then dismissed as “Bush haters” anyone who complained about the absence of W.M.D. or warned that the victory celebrations were premature. Here are a few selections:

Nov. 19, 2002: “The greatest risk for us in invading Iraq is probably not war itself, so much as: What happens after we win? … There is a batty degree of triumphalism loose in this country right now.”

Jan. 16, 2003: “I assume we can defeat Hussein without great cost to our side (God forgive me if that is hubris). The problem is what happens after we win. The country is 20 percent Kurd, 20 percent Sunni and 60 percent Shiite. Can you say, ‘Horrible three-way civil war?’ ”

July 14, 2003: “I opposed the war in Iraq because I thought it would lead to the peace from hell, but I’d rather not see my prediction come true and I don’t think we have much time left to avert it. That the occupation is not going well is apparent to everyone but Donald Rumsfeld. … We don’t need people with credentials as right-wing ideologues and corporate privatizers — we need people who know how to fix water and power plants.”

So Molly Ivins — who didn’t mingle with the great and famous, didn’t have sources high in the administration, and never claimed special expertise on national security or the Middle East — got almost everything right. Meanwhile, how did those who did have all those credentials do?

With very few exceptions, they got everything wrong. They bought the obviously cooked case for war — or found their own reasons to endorse the invasion. They didn’t see the folly of the venture, which was almost as obvious in prospect as it is with the benefit of hindsight. And they took years to realize that everything we were being told about progress in Iraq was a lie.

Was Molly smarter than all the experts? No, she was just braver. The administration’s exploitation of 9/11 created an environment in which it took a lot of courage to see and say the obvious.

Molly had that courage; not enough others can say the same.

And it’s not over. Many of those who failed the big test in 2002 and 2003 are now making excuses for the “surge.” Meanwhile, the same techniques of allegation and innuendo that were used to promote war with Iraq are being used to ratchet up tensions with Iran.

Now, more than ever, we need people who will stand up against the follies and lies of the powerful. And Molly Ivins, who devoted her life to questioning authority, will be sorely missed.