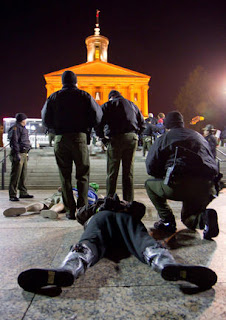 For the second night in a row, eager beaver cops swarmed down on the peaceful Occupy Nashville protesters at the People's Plaza, this time 26 arrests were made. In case anyone was wondering what the hell there is to protest about, the not so great state of Tennessee is busily making the protesters case by perpetrating serious constitutional violations against its citizens.

According to the repressive state of Tennessee, not only do we not have the right to peaceful assembly, we don't even have the First Amendment right to a free press at that peaceful assembly. The first arrests were carefully staged at 3am to avoid press coverage and now in what appears to be an effort to intimidate the press, a reporter has been arrested for the crime of covering the police state tactics of bully Governor Bill Haslam.

The reporter works for the Nashville Scene:

Among those under arrest is evidently Scene reporter Jonathan Meador, who has been covering the protests. A fellow reporter asked the trooper arresting Meador if he really intended to lock up a journalist there to cover the events. According to the reporter, the trooper replied, "You want to be next?"