San Francisco Chronicle Endorses 'None of the Above' 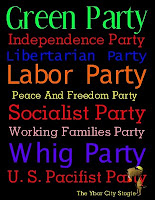 The San Francisco Chronicle officially endorses none of the above in the U.S.Senate race between Carly Fiorina and Barbara Boxer.

Hopefully the newspaper will do the same in races that don't involve the very rare phenomenon of a woman running against a woman.

Like a whole lot of voters this year, the newspaper can't summon the energy to get out of bed to vote for Tweedle Dum or Tweedle Dee:

It is a dismal choice between an ineffective advocate for causes we generally support and a potentially strong advocate for positions we oppose. Neither merits our endorsement for the U.S. Senate.

Are you listening Congress? Maybe it's time to dismantle the rules that are locked in place solely to ensure that voters have no choice outside the miserable two-party winner-take-all system.