Dear Abby is For Gay Marriage! 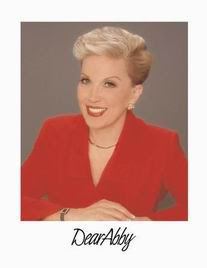 The verdict is in folks. Dear Abby is pro same-sex marriage. Tell your unenlightened and foolish elected officials to ask Abby!

An excerpt from the NY times follows, but here's the best part, and I fully expect to see some Democratic lawmakers crafting this into law - at least in the advanced, I mean blue, states:

"If gay Americans are not allowed to get married and have all the benefits that American citizens are entitled to by the Bill of Rights, they should get one hell of a tax break."
-- Jeanne Phillips, aka Abigail Van Buren
NY Times:

'''I believe if two people want to commit to each other, God bless 'em,' the syndicated advice columnist told The Associated Press. ''That is the highest form of commitment, for heaven's sake. . . "

"Last year, addressing a groom whose gay brother refused to serve as best man or even attend the wedding because he did not have the right to marry, she made it clear her sympathies lay with the boycotting brother."

'''Accepting the status quo is not always the best thing to do,' she wrote. 'Women were once considered chattel, and slavery was regarded as sanctioned in the Bible. However, western society grew to recognize that neither was just. Canada, Belgium, the Netherlands and Spain have recognized gay marriage, and one day, perhaps, our country will, too.'''