Court-Martial at Ft. Campbell for Rape & Murder of Iraqi Child 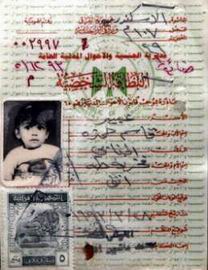 The Women's Media Center has people here in Tennessee to cover this week's court-martial at Fort Campbell. Sergeant Paul Cortez of Barstow is "expected to plead guilty today to rape and murder charges."

Abeer Qassim Hamza Al-Janabi was gang-raped and murdered. The child's mother, father and younger sister were shot to death.

"Cortez was charged along with four other current and former Fort Campbell soldiers in one of the worst atrocities allegedly committed by U.S. military personnel in Iraq. One soldier has already pleaded guilty to rape and murder in the case and was sentenced to 90 years in military prison. Two others await courts-martial in the case. A former soldier, Steven Green of Midland, Texas, is accused of leading the attack. Green was discharged from the military before the allegations surfaced in June."

Today's New York Times editorializes about the horrifically low standards adopted by U.S. Military recruiters under the Bush regime. In the last three years, the military has granted more than 125,000 moral waivers.

One of those moral waivers was given to Steven Green of Midland, Texas.

Green was subsequently diagnosed by the Army Combat Stress Team as a "homicidal threat." The soldier was given a drug for "acute mania associated with bipolar disorder" one day, and on the very next day he was sent back to the war.

The "homicidal threat" is now charged with leading the gang of soldiers who gang-raped and murdered a 14-year-old girl and her family.

For more on this horror story, see the Women's Media Center.

For more on moral waivers, see the Gun Toting Liberal and Steve Clemons who both note that "the Pentagon is discharging more than 700 people a year" who are guilty of no crime -- other than being gay. [via]

"'We're looking for high school graduates with no more than one felony on their record,' one recruiter said."

Photo: "A citizenship identification card issued by the Iraqi government in 1993 shows Abeer Qasim Hamza al-Janabi with a date of birth of August 19, 1991, as translated from the identity card in this handout photo from her relatives in Baghdad July 9, 2006."