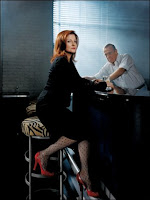 Whether or not the country is ready to elect a woman president or a black president, it’s definitely not ready for a metrosexual in chief.

In presidential politics, it’s all but impossible to put the man into manicure. Be sensitive, but not soft. Effete is never effective. Not much has changed since George H. W. Bush drove his New Hampshire campaign off the road by requesting “a splash” more coffee at a truck stop.

John Kerry sank himself by windsurfing in spandex and ordering a cheese steak in Philly with Swiss instead of Cheez Whiz. We haven’t reached the point where we can handle a green-tea-soy-latte-drinking, self-tanning-sea-salt-mango-body-wrapping, Norah-Jones-listening, yoga-toning chief executive.

Bill Clinton sometimes flirted with metrosexuality, with Zegna ties, Christophe haircuts, Donna Karan suits and keen anima, but the heterosexual beat out the metrosexual. Americans have revered such homely leaders as Abe Lincoln. They seem open to balding pates like Rudy’s and flattops like Jon Tester’s. They don’t want self-confidence to look like self-love.

John Edwards has reminded us that even — or especially — in the age of appearances, you must not appear to care too much about appearances.

When you spend more on a couple of haircuts than Burundi’s per capita G.D.P. , it looks so vain it makes Paul Wolfowitz’s ablutions spitting on his comb look like rugged individualism.

Following his star turn primping his hair for two minutes on a YouTube video to the tune of “I Feel Pretty,” Mr. Edwards this week had to pay back the $800 charged to his campaign for two shearings at Torrenueva Hair Designs in Beverly Hills. He seems intent on proving that he is a Breck Girl — and a Material Boy.