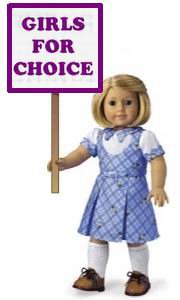 The rightwing groups spreading the news of a call for a boycott include: The American Family Association, Priests for Life, Operation Rescue, Stand True Ministries, Aid for Women and Illinois Right to Life, Focus on the Family and Concerned Women of America and, of course, the Southern Baptists.

According to Newsweek, the Pro-Life Action League of Chicago is organizing a demonstration "outside the Chicago store on the day after Thanksgiving. Though the league has requested that members leave their graphic signs at home, some are vowing to show up with them anyway."

The doll company's sin is that it has partnered with the non-profit Girls Inc., in a campaign to promote high self-esteem among girls. The radical right has a problem with Girls Inc. The nonprofit supports birth control and freedom of choice. Girls Inc., also supports girls who are lesbian or bisexual [gasp].

The local daily, The Tennessean, has an Op-ed in today's paper, titled: American Girl dolls' link to liberals isn't child's play. I wish I could provide a link to the rant - which comes straight from the rightwing American Family Association (AFA) - but the paper doesn't have it online, and according to my search efforts, neither does any other paper (not even AFA).

But then, this paper is a leader in red state media efforts to champion radical rightwing views, which is why it is also known as, The Southern Baptist Times.

The Op-ed is authored by Kathryn Hooks; the tagline identifies her as the "director of media and public relations for the American Family Association." (email her: khooks@afa.net)

Hooks charges that Girls Inc., "supports abortion as a 'woman's freedom of choice, a constitutional right' and 'convenient access to safe, effective methods of contraception.'" Girls Inc. offends Ms. Hooks further because it offers books on the subject of sexual orientation.

God forbid that our daughters should have birth control and books too!

According to Ms. Hooks, Girls Inc., "is involved in feminist leaning advocacy." Excuse me while I commit that great Gore sin, but sometimes my eyes just have to roll. Obviously, Ms. Hooks would not have her job if it weren't for some serious "feminist leaning advocacy." But there is money to be made by betraying the movement that made it possible for women, such as Kathryn Hooks, to have careers other than motherhood and mopping floors. And there have always been women who will take the money in exchange for using "feminist" as a dirty word.

What you can do:

You can write a letter of support to American Girl here.

You can purchase the "I Can" bracelets, which started the controversy, here.

American Girl dolls can be purchased online as well as at your local toy store.

If you live in Chicago, you might want to show up at the American Girl store the day after Thanksgiving.